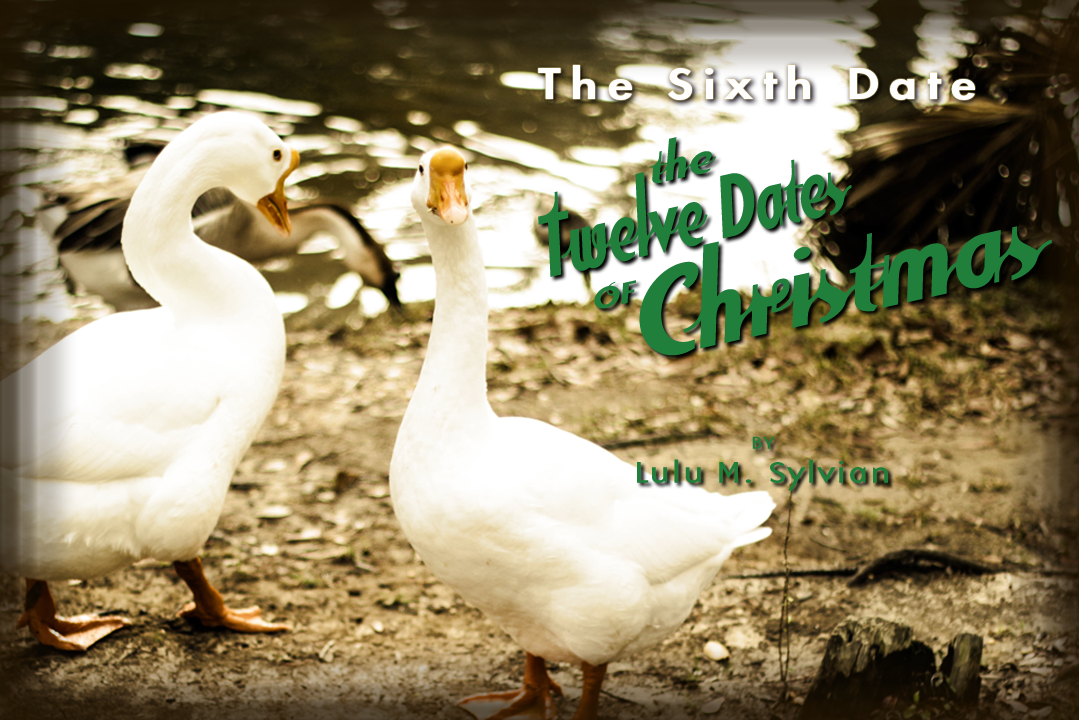 It seemed appropriate that on the sixth day of Christmas Chris and I sat on a bench next to a duck pond. I felt stupid, I did not even know there was a duck pond back here. But we sat and fed ducks and geese. As far as I could tell none of the geese were laying eggs, so much for six geese a laying. Chris was quiet today. Even his kisses felt toned down.

I tossed a chunk of bread from my sandwich to the ducks and geese that had gathered around us in hopeful expectation. We weren’t talking, just eating in companionable silence. I was nice. It didn’t feel awkward, or like we needed to be talking. Actually, I really liked it. We could just be together and that was good.

“Pish, you’re perfectly fine company. I kind of like just hanging out with you.” I scooted closer to him and rested my head on his shoulder. “How late were you here last night?”

“After midnight. But the good news is that I will get everything done tonight, and we can get out of here around four tomorrow.”

I rested my chin on him and watched his face as he spoke. I really liked how his lips moved. This close I could see the patches on his cheek where he accidentally missed shaving this morning. I trailed my finger down his sideburns and along his jaw.

“That tickles.” He complained with a smile.

“Hmm?” He chewed. I liked watching his jaw move.

“We aren’t exactly dating are we?”

“Not in the past few days simply because of my schedule this week, but I’ll take you out over the weekend. Promise.” He said.

Chris turned to look at me. He didn’t say anything just looked me in the eye. We sat like that for a long minute. He lay his hand against the side of my face and leaned in.

“Chris? What the hell are you doing out here?” The voice was sharp, female, and bitter.

A fit sweaty woman stood before us with her hands on her hips. An iPod was strapped to her upper arm and she plucked ear pods out with one hand.

“Hi, Jess. Running on lunch?” Chris said slowly. “I’m working over there these days.” He pointed back to our building.

“I always run at lunch, or did you forget? Why aren’t you running?”

Chris breathed out through his nose. “I don’t run all the time anymore Jess. There are other things to do.”

She made a face that spoke volumes. She did not approve of his attitude.

“You should run, you’ll get soft.” She glared at both of us, then raked that glare up and down me. If lasers could shoot out her eyes, I would be crispy fried. “Suit yourself.” She slammed the earbuds back in then took off running again.

I stared at Chis as he watched her trot away.

“Who was that?” Please don’t say, girlfriend, or wife.

“And she’s a runner like you used to be?”

I could tell he was about to get heavy with whatever he was going to say. I had started it asking about our dating situation, so I pretty much couldn’t blame him for things getting uncomfortable.

“I ran, a lot. My girlfriends for a while were also runners. I pretty much exclusively dated runners. It’s what we did. No movies, no drag shows, running.”

“How long were you and Jess together?” I felt myself easing away from Chris. I’m not a runner, I am so not a runner. We’ve talked about this, and yet, I still felt this was a big deal for him.

“We were together for three, almost four years. We were actually engaged until I wasn’t committed enough for her. I think it was over some half marathon that I was not interested in. I wanted to do something else that day. I try not to remember honestly, being over it and all, but it was my parents’ anniversary.” He shivered as his memories came back. “We broke up over having to choose between a half marathon and my parents’ anniversary.”

“How long ago?” Now I was worried that I was rebound girl.

“Over two years ago.”

“And rebound girl?” I had to be certain.

“She was cute, and we dated for about three months. I’ve mostly been single and dating since then. What about you?”

“I had a serious boyfriend in high school. Lost virginity together, going to get married, the whole bit. We made it through a year and half of college. I think it was a mutual dump. Did date one guy for about two years, but nothing real long term since maybe six months here and there. I’m seeing someone now.” I said. I watched Chris’s face fall. “He’s tall with dark blondish hair. Used to be a runner, but does weights and stuff. Likes to do just about anything, a really nice guy.” I liked watching his grin come back as he realized I was talking about him.

He moved closer to me and started to lean in. “Is he any good at kissing? You seem to me to be the type of girl who likes to be kissed.”

“He’s the best,” I said against his mouth as he began kissing me.

Ducks and geese protested as we kissed because I had stopped tossing bread their way.

“I hope Jess didn’t upset you,” Chris said as we headed back towards the office. “I don’t want you to think that because she was my type that I don’t like you.”

I turned and smiled at him. “Hey some people have a set type, and others are all across the board. It’s no big deal.” I shrugged.

“Look Nat. You asked me earlier if we’re dating. And as corny as it sounds, I want to say no. I want to say we’re past the dating part and we’re a couple. I wasn’t expecting any of this when I asked you to go to dinner. I just didn’t want to be a sorry ass alone on Christmas night. But you turned out to be the most amazing woman. You are nothing like anyone I have ever dated before.” He held his hands in front of him, inches from my body, indicating my figure. “Not in shape, and not in sense of humor, not in anything. And I really like you.” He nervously ran a hand through his hair. “Not one girlfriend in the past has ever brought me a pizza and offered to hang out with me when I’ve had to work late. Not one.”

I blinked at him in stunned silence.

I know that the thing on Christmas was by chance, and I know it really was just to not be alone. That didn’t make his confession sting any less. But everything else he said took the sting all away.

“So this kind of does away with that whole relationship timetable huh?” I finally said. “We skipped right over dating and fast-tracked to the exclusive couple part. Huh?”

“That’s not exactly what I meant. I don’t want to make you feel like you can’t date other guys. But. Yeah, no. That is what I mean. Damn it. I don’t want you seeing anyone else. I want you to be my girlfriend and not just a girl I’m dating.”

Chris walked in a big circle. His hands raking through his hair. He was stressed. My initial reaction to be snarky was put on hold. I didn’t want to be the cause of his stress. I seriously liked him.

“Hey.” I pulled him into my embrace. “I can’t think of a nicer plan, to be exclusively your girl, and you being exclusively my guy.” I could feel the tension leaving his body as I held him.

He wrapped his arms around me. “See this is what I’m talking about. You are different. You aren’t putting me on some timetable, and you are okay with how fast this is happening. You want to know why I was at work until after midnight?”

I nodded. “You got dumped on by your coworkers. You had a lot to do.”

“I was distracted by you and that damned pizza. I kept thinking I should have let you stay, but then I know we would have ended up making out more. Of course, that led me to thinking about making love to you on my desk on top of all of those papers, and then I couldn’t focus at all.”

I blushed and swallowed hard. We weren’t even into heavy petting yet and he was talking about the sex. Not that I hadn’t thought about that too, but hearing that I did that to him too was, wow.

“I guess I had better not volunteer to stay late with you tonight then?” I asked.

“Knowing you are willing to just hang out with me, and not be the center of my attention is a lot. Most women would demand that I focus on them, even if they know I have a job to do. I know you wouldn’t but I’m still gonna say no thank you. Because even though you wouldn’t, I would want to give you all of my attention.”

I was falling in serious deep like with this guy. I definitely wanted all of his attention, hanging out while he worked was a bad idea.

“Can I at least stop by for some making out before I head home tonight?” I pleaded.

“Please.” He began nuzzling my neck. He groaned then stopped nibbling on me, he rested his forehead against my shoulder. “Damn.”

He stood and looked down at me. “I might be in a meeting.”

“So call me, let me know what’s going on. We’ll figure this out. It’s only one more night then we have a long weekend together right?” I tried logic on him.

He kissed me, it wasn’t a soul searing kiss. It was a nice simple kiss, a basic kiss because we both knew it wasn’t the last one. We knew there were plenty of more kisses coming. For a split second, I realized this may be the first real grown-up-in-a-relationship kiss of my life.

catch up with the fifth date

continued on Dec 31, with the seventh day of Christmas

1 thought on “The Twelve Dates of Christmas: the sixth date”