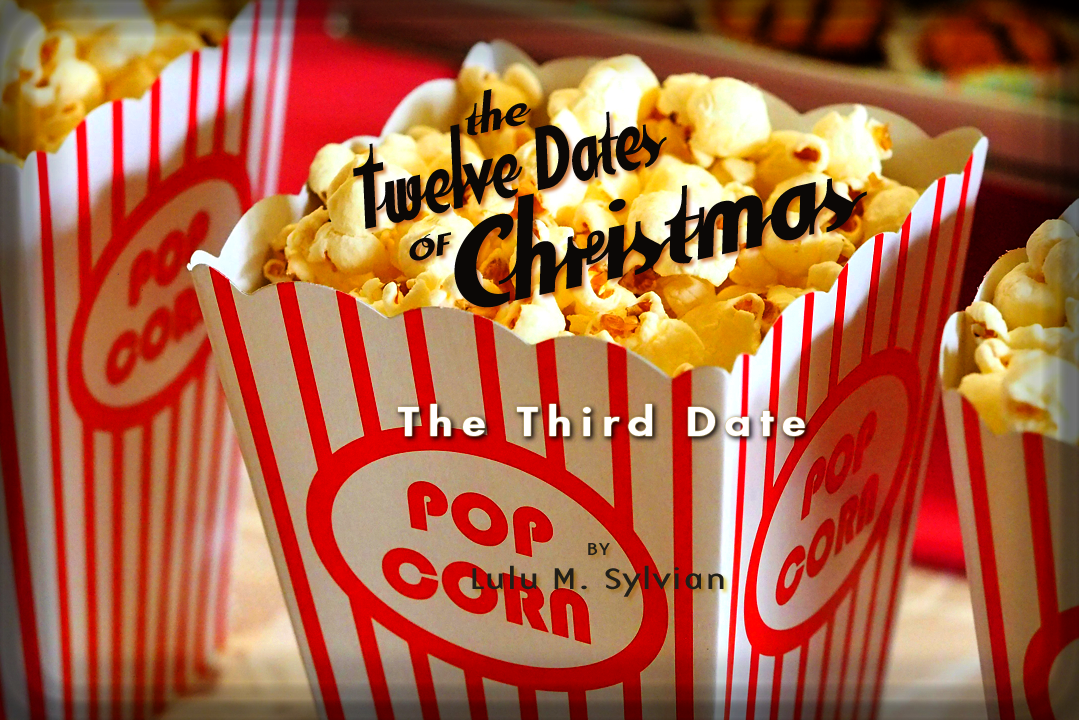 On the third day of Christmas, I lay on the couch contemplating the meaning of that not-quite-a-kiss kiss. Would Chris have given me a proper kiss if that jackass hadn’t threatened to tow his car? Or had Chris seen it as an opportunity to get away and give me a nothing of a kiss when he felt pressured to kiss me but really didn’t want to?

I had barely felt him at all. A slight pressure, then nothing. My lips longed to feel his lips. I wanted a real kiss; a real kiss and a good word to describe his hair. Another beer commercial– what channel was I watching again? All the ads were for beer, cars, or ED medication. Malted barley, roasted hops, liquid amber ale. The color was close, but the connotation of beer wasn’t sexy enough. It didn’t play right across my tongue.

Beer just didn’t stir my loins the way a good description of Chris should: kind of blondish, with dark blue eyes. It just didn’t do him justice. Dark blue almost wasn’t the right color either. His eyes were indigo. Now that’s a sexy color, mysterious and comforting. Sigh. I was enjoying hanging out with Chris, last night’s date had been so much fun. I just hoped I wasn’t reading more into all of this. There are girlfriends, and there are girl friends. That space between words is all the difference. That space is the “friend zone,” a wonderful platonic location or the pit of hell. In my case, that space is the writhing cesspool of doom. And that kiss, well, it really wasn’t enough to properly close that gap between words.

“Movies start in forty-five minutes, I don’t have time to come get you. Meet me?”

Sigh. Chris had the nicest voice. I closed my eyes and let the tones of his voice caress me. I hadn’t heard a thing he said. “What?”

“Oh right, yeah.” I sat up forcing my body to focus.

“Meet me at the theater. I ran out of time and I can’t pick you up.”

“We never really arranged that, but yes, I’ll meet you there in thirty.” I shoved my feet into sandals. Fortunately, I was already dressed, even though my hair was still wet. Oh well. I didn’t have time to get all gussied up. Chris would have to take me as I came: damp hair, no make-up, and ratty jeans.

Unfortunately, on the drive to the theater, I had time to panic about my wash and wear state. Look if Chris didn’t like me this way, then he really wasn’t interested. This was how I was on most non-work days, and pretty much as soon as I got home from work. I wasn’t going to change for him. That doesn’t mean that I didn’t feel a touch of panic for not dressing to show off my better assets, read: the boobs. It just meant I accepted that this was me. I needed a boyfriend who accepted me this way. I more than kind of hoped that would be Chris.

Somehow, overnight I forgot how cute Chris was. He stood there with his hands in his pockets waiting for me. For me! Broad shoulders and beer colored hair. I started to pull my wallet out of my bag. Chris’s big hand was on mine and pushing my purse down.

“I’ve got this.” He said reaching for his own wallet.

“I invited, so I pay. Besides, you paid last night.”

“Last night was practically free, thanks to your clever chest.” He smirked. He made a circling gesture in front of his own. “How’s the burn? They gonna be okay?”

“It’s still a little pink, but it will be fine. You get the tickets, I’ll get the popcorn?”

“Sounds good,” he nodded and proceeded to purchase the tickets for the two movies we agreed to see.

We sat shoulder to shoulder as the credits of the second movie scrolled past. We were the only ones left in the theater.

“I always stay till the end,” I said munching on more popcorn.

“You never know.” Chris completed my thought. I really liked this guy. But I still didn’t know was I in the friend zone gap or not?

“Man those guys are unreal. I think they have CG muscles.” He tossed another handful of popcorn into his mouth.

I laughed. “You could get like that with focus and training.”

“Naw they are too unreal. Their shoulders are so freaking wide.”

“Only in comparison to their hips. It’s these muscles here.” I reached under his arm to poke him in the ribs. “That make them look so wide.” He squirmed and giggled. I tickled him some more.

He reached over and began tickling me in the ribs. Next thing I knew, the armrest between our seats was up and out of the way, his hands were on my back, and his mouth was on mine.

I sank my hands into his hair, whatever color it was. And pulled him in. I consumed him hungrily, and he consumed back. Tongues twined and breath mingled. He tasted like popcorn and salt.

Chris grabbed the bucket of popcorn and my hand. We were both laughing as we ran past the kid who had hit us with his high-beam flashlight. I smiled like an idiot. No gap, no friend zone. That was definitely a girlfriend kiss.

We ran all the way to the parking lot. Chis stopped by his car, dropped the popcorn, and pulled me back into his embrace. I liked kissing him, I liked being pressed against him. He was built like one of the movie guys with nice broad shoulders and big muscles. Okay, maybe not as big. He didn’t work out professionally, but he was still firm and hard, and I liked being squished against him.

“Now what?” I asked when I came back up for air.

“Dinner and more necking.” He suggested.

I couldn’t think of a better plan.

“I buy dinner, we neck on your couch?” I asked.

He shook his head. “Roommates. I buy dinner, we neck on your couch.” He countered.

“Sounds like a plan. What do we want to eat?”

We both said tacos at the same time. We laughed and he looked into my eyes. “I like how you think Natalie. Where to? Lead and I will follow.” Why did I want to think he was talking about more than tacos?

I led Chris to a corner with a terrific local taco truck. I ordered three chicken tacos, he had four. We ate them leaning against the hood of his car. I kept blushing and glancing over at him. He kept doing the same.

Back at my apartment, my nerves got the better of me. I turned on the TV for a distraction. “You want something to drink?”

“Sure what you got?”

“Beer, wine, soda, water.” I gave him an inventory of my kitchen.

“Chardonnay ok with you?” I asked as I brought out the bottle and two glasses.

He smiled and watched me sit down, then pour and hand him a glass.

I watched him over the rim of mine as I took a sip. He reached forward and took my glass. I followed his motions as he set it on the coffee table next to his. He reached for me again, this time hooking his hand around my neck and pulling me forward to him.

“I’m done with wine. I’m here for you.” His lips slid across mine. I closed my eyes and breathed him in. My face began to feel raw from all the kissing. His hands never traveled higher than my ribs. He kissed the side of my face and sucked on my ear. I know I moaned. It felt wonderful.

We didn’t come up for air for what seemed like forever. And when we did, it was never for very long. Mostly it was tongues and lips, and teeth.

Chris pulled back and looked at me. His mouth was red, and beginning to look like it might be getting sore. His hair was a mess. I’m sure mine was too. I gently ran my fingers across his lips. He closed his eyes and kissed my fingertips, “I,” his voice was raspy. He cleared his throat. “I should get going.” He said.

I nodded. I would have loved to have him stay, but we were clearly still in the necking phase of things. Of course, I could change all that by pulling my shirt off. But I didn’t. I kind of liked that this developed on a daily basis.

We stood up and awkwardly adjusted our clothes.

“I have a long cold shower to take.” He said as he made his way to the door.

I followed him, a smile on my lips. “I’ll see you at work tomorrow?” I asked.

“Absolutely.” He leaned in for another kiss. “I’ll see you tomorrow Nat.”

“Night Chris.” I leaned against my door as I watched him walk away. It was a really nice view.

Sigh. Tomorrow was work after a long weekend. I sighed again. I looked forward to getting back to work, the first time since that new job honeymoon phase had worn off. Tomorrow I would see Chris again. And maybe we could neck some more in a back stairwell.

the story continues tomorrow with the fourth date

2 thoughts on “The Twelve Dates of Christmas: the third date”