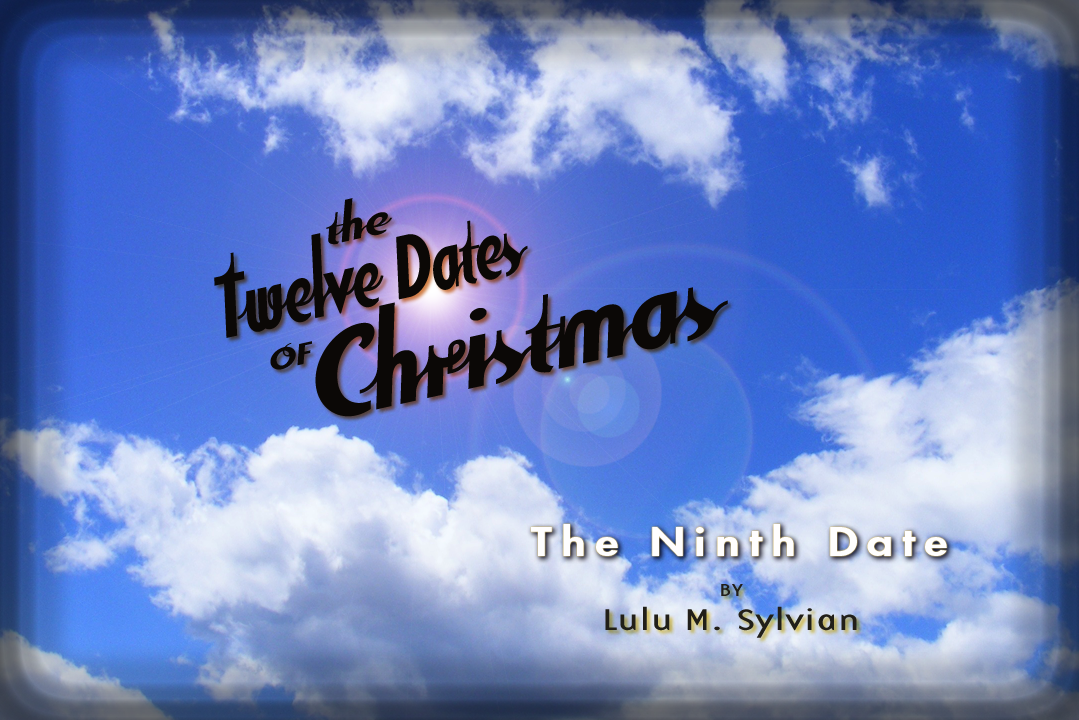 I slept in. Chris was already gone by the time I woke up. I padded my way down the long hall. I wanted to see if I could snag one of those delicious butterscotch bars for breakfast. I heard voices in the kitchen, and headed that way, figuring I would find Chris there.

The voices began to sound strained, so I paused.

“I like her a lot. Will you try to be nice?” I heard Chris’s voice. I leaned against the wall so I could listen in.

“Because I’m serious.” Serious? That’s a big word in a relationship. I think I just fell even harder.

“I’m glad you found someone son, but Mike’s right, she’s not your usual type,” Pat said. Funny. Pat maybe mom now, but her words seemed more like a dad to me. Of course Pat had years of dad first before she became a mom.

“What? A beautiful woman?” Chris asked. I think I needed to kiss him for that.

“She’s fat.” Mike was not my favorite person right now. I turned to leave. I didn’t need to listen to this. Chris’s family was skewering me. Okay fine, I’m not what they had in mind for their son and brother, but it really wasn’t their decision.

I turned to leave but found Grace standing next to me. Her finger lay over her lips in a shushing gesture. She placed a hand on my forearm to keep me in place.

“What Mike means is she’s not, well,” Pat paused, searching for a word. “She is not as physically fit as you have always been drawn to.”

“She’s not fat, she’s, she’s average. And how do you know she’s not fit?” Chris defended me again. My heart beat hard with emotion. It was difficult to listen to someone tear you down, but Chris’s replies made me smile, even though I had started crying.

“She’s a cow. She’s always spilling food on her shirt. And her boobs are huge.” Mike said that like it was a bad thing, a very bad thing.

“She is well endowed, that’s different for you.” Pat seemed to be on Mike’s side. Did she think I was a cow too?

“So she’s chesty. Breasts are amazing, I’m wondering how I never realized that before. Yes, she’s different physically, that’s because I’ve been a jackass for only looking at a woman’s shape to determine her worth. And I only ever dated runners. Honestly, I’m beginning to wonder if I haven’t been wrong about my physical type all these years. And you know something, that’s really rich coming from you. You weren’t even the same gender when you and mom got married. So don’t talk to me about physical types.” Chris barked at them.

“Man the sex must be something else. She has you so whooped.”

A crash, a thud, and a lot of cussing.

Mike ran past us with a bloody nose. Chris stormed out after him. He stopped when he saw me. He took one look at the tears streaming down my face and pulled me into his arms. He held me tight, slowly rocking back and forth. I held on to him like he was my life saver in a drowning pool.

“Aw crap,” I heard Pat. Clearly, she had followed her sons out into the hall. “How much of that did she hear?” She asked.

“All of it.” Grace sounded pissed.

“Not now mom,” Chris said into my hair.

We just stood holding onto each other for a while. He leaned back and wiped my tears. “My brother is an asshole.”

I nodded in agreement.

“And what they said was stupid. You know that right?”

I nodded some more.

He pulled me in for more hugging. “And your breasts are outstanding.”

“I like you, and its pretty cool you come with the boobs. I like the boobs.” He said into my hair.

“Let’s get out of here. Grab your skates, we’ll get lunch somewhere then hit the beach for skating.”

I nodded and padded back down the hallway to his bedroom.

Now skating I love, it feels like I’m flying. I don’t know if Chris got the same adrenaline rush from it as I did, but skating right now was a really good idea. It would whisk away the hurt feelings and the overwhelming sense of worthlessness.

I had to dress right. There was a sense of badassery that was supported by short shorts and stripey knee socks. Plus I really wanted to look hot for Chris. I rubbed chaffing gel on my inner thighs. Yes, they were a bit on the larger size, and yes they touched, but they didn’t need to court unnecessary chub rub.

I tossed on my hoodie, grabbed my skate bag and headed outside to meet Chris.

His grin said it all, he definitely liked my skating look. “Damn, you’re sexy.” He put his hands on my hips and looked me up and down.

I heard Mike scoff, and watched him get into the back of his parent’s car.

“Mom insists that we all have lunch and go to the beach together. It’s her way of trying to smooth things over. I tried to explain that you might not want to be around Mike for a few hours, but I lost.” Chris spoke through his teeth. He was not happy about the whole thing. “However, I do get to drive you alone, in my car. You do not have to be in a car with that little asshole.”

I sighed. “I can play nice through lunch. But once we’re on skates all bets are off.”

“Why do I get the feeling you aren’t telling me something?” Chris asked.

“Let’s just say I have a surprise of my own.”

Lunch was strained, tasty but strained.

We geared up in a parking lot near the trailhead. Chris said the trail made its way past the beach and continued on out for a while. I put on my knee pads before lacing on my skates. I stood slipping on wrist guards when Mike did a hockey stop in front of me, trying to show off and be intimidating all at once.

“What the hell, roller skates? Knee pads? This isn’t the rink little girl.”

I stood with my hand on my hip and glared at him. I could squash him, and yet there he was trying to intimidate me.

Mike continued to laugh. “All dressed up so we think you play roller derby?” He mocked.

I didn’t move, my expression the same.

“Mikey, I think the answer is she does play roller derby.” Chris smacked his brother on the shoulder, hard. Mike wobbled on his roller blades. Chris grabbed my hand and we rolled off together.

“So is this the surprise?” He asked.

“Sort of, I said I skate, I meant it. Maybe Pat and Mike will see that a fit woman can also have some body fat.” I took off.

I flew. Chris chased after me and kept up without any problems.

We skated, swerving in and around walkers and cyclists. I showed off and jumped over curbs, and on top of planters. My knee pads got used as I came crashing down more than once, but that’s why I wore them. I let the rush of wind and the adrenaline whisk away my worries.

I sat laughing on a grass embankment. “I needed that,” I said as Chris joined me.

“I sort of played before I moved here. Mostly just the workout team, and practice. I never made it onto the actual team. It’s a lot harder than people think. But it got me onto skates, and I love them. And I love that I don’t have to be skinny to enjoy it, and,” I grabbed my boobs and bounced them up and down. “These don’t get in the way.”

“You totally owned my little brother.”

“Good,” I said with wicked delight. That was the plan. “So do we wait for everyone else to catch up, or do we head back?”

Chris lay back and looked up at the sky. He reached up and grabbed my hand. “We can stay here for a bit before heading back.” I lay back to watch the clouds with him.

A soft breeze moved the clouds around, changing their shapes so they looked like ladies dancing on the wind.

Chris sat on the floor, on his makeshift bed. “I’m sorry my brother was such an ass all weekend.”

I shrugged. I didn’t want to say it was okay because it wasn’t. He really hurt my feelings. I let out a derisive snort. “But I showed him, didn’t I? Little twerp couldn’t figure out how to talk without putting his foot in it all afternoon.”

Mike couldn’t keep up with us skating. I’m sure there are other sports he would beat my ass in, but not today on skates. “Maybe he’ll learn to not be so fast to judge someone by their looks.”

“He’s an idiot, he won’t learn. I know mom got schooled. Plus I think she got in trouble.” Chris chuckled.

“She certainly tried to make up for it after that. Your moms are great. Sometimes we all say stupid hurtful things, as long as she realized it. I think she is genuinely sorry. Not so much Mike, but so what, I’m not here to impress him.”

“Hopefully you.” I stood over Chris in my pink unicorn jammies, forcing him to look up. I laced my fingers through his butterscotch hair. Yeah, butterscotch, sweet but not a sticky flavor, a sophisticated candy. That color left a better taste on my tongue than beer or dead grass did.

He put a hand on the back of my thigh and slid it up. I knelt down so that I straddled his lap. His hands grabbed my butt. “I’m very impressed.”

It was sexy, it was hot. It was going to lead to more. Especially the way he held on to me, and kissed me.

“I want you but I can’t do this with your parents in the next room, at least not the first time,” I spoke against his mouth.

He kissed me back.

“And what happens tomorrow when I take you home?” He nuzzled my neck.

“You stay the night.”

His kisses were magical; they took me out of my body and sent me out among the stars.

“You should go to bed. The sooner you fall asleep the sooner tomorrow comes.” His voice was rough with emotion.

“You’re eager for tomorrow?” I asked.

He didn’t answer, just pulled me in closer for more kissing.

I reluctantly left Chris’s lap and crawled into the bed, leaving him alone on the floor. “You could join me up here you know.”

“We aren’t going to do anything.” I reminded him.

“I know, and that’s why I wouldn’t be able to sleep, not with you right there. Too much temptation. It’s safer down here.”

“Suit yourself.” I rolled over and pretended to sleep. It was a very long night. I had never been so eager for a long weekend to be over.

catch up on date eight

The story continues on Jan 3 with the tenth date.

1 thought on “The Twelve Dates of Christmas: the ninth date”