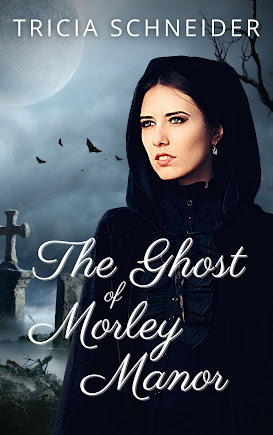 When Alice Worthington’s father dies, he leaves Morley Manor and all his debt to her and her younger brother. Desperate to find a way to pay the creditors, Alice performs a séance to contact the spirit of the last man to have seen the jewels rumored to be hidden within her home.
Sir Nicholas, a two-hundred-year-old roguish ghost, strikes a bargain with Alice. Find his earthly remains and bury them in consecrated ground. Only then will he reveal the location of the hidden jewels. Alice agrees not knowing when the time comes, she must decide between saving her home or saving the soul of the charming ghost who haunts Morley Manor.

A scream tore into the night, a high-pitched, frightening sound that sent shivers coursing down my spine. I scrambled back against the headboard of my bed, gripping my candlestick and gasping for breath. As I struggled to breathe, I realized those were my chilling screams.
I stopped screaming and faced the man, raising my candlestick in front of me like a shield.
“Come no closer, demon!”
“You can hear me?” A look of wonder passed over his handsome face. His eyes widened. “You can see me?”
“Of course, I can!”
“But how?” The man glanced around the room as if searching for the answer. “How can this be? No one alive has seen me for over two hundred years!”
“Begone from my chamber!” I shouted and my voice trembled with fear. “Leave me in peace!”
“This makes no sense at all.” He continued his dialogue, ignoring my rising panic. He stood and began pacing at the end of the bed. My eyes widened as I witnessed him walk through the edge of the bed a time or two as he was so absorbed in his thoughts, he failed to see in which direction he walked.
“You had no awareness of me before you left this night. What changed?” He lifted his head and turned to face me. “What did you do when you left Morley tonight? What happened to you?”
“I—I—”
My stammering annoyed him. He leaned over the bed, resting his fisted hands against my feet. I could feel his weight as he leaned onto the mattress.
“Tell me, woman! I must know!”
I whimpered and struggled away from him, trying to meld myself into the headboard. I glanced over his shoulder, judging the distance between myself and the door, wondering if I was fast enough to run by him. Wondering if I was brave enough to try.
“Ah,” the specter said, for I knew he was no mere man. He was a ghost, a demon, a creature not of this world, for whom on this plane of existence could pass through solid objects.
“I see I’ve startled you.” He stood and raised outstretched hands before him as if he placated a frightened animal. “I will not harm you. I cannot. I have no mortal flesh. I cannot touch you.
Observe…”
He reached toward me, placing his icy fingers on the hand holding the candlestick. I say icy fingers because I felt the press of them firmly against my skin, a solid enough touch for a specter.
He gasped.
I looked to his face and if I were not so full of fright, I might have found amusement to witness the color drain from his face. Did ghosts grow pale as humans when in a state of bewilderment?
He stumbled back, staring at his hand.
“What sorcery is this?” He whispered. “What did you do this night?”
“I… I…” I licked my suddenly dry lips so I could speak. “I attempted to summon the spirit of Sir Nicholas Weatherby.” I might as well be truthful while speaking with a ghost. After all, how could he condemn me when he, himself, was dead?
“Sir Nicholas Weatherby?” he repeated, his eyes wide. “I am Nicholas Weatherby.”

Where can readers find The Ghost of Morley Manor?

Hello and welcome, readers! We have Tricia Schneider here with us today. Tricia Schneider, thanks for visiting us.
How long have you been a writer and how did you come to writing?
I’ve been writing for about twenty-five years since I was 15 years old, but I’ve only been a published author for the last ten years. I began writing for fun. I was a kid looking to entertain myself. My brother and I used to create our own newspaper and forced our family members to subscribe. We’d include outlandish articles which now kind of reminds me of The Onion! As a kid, I also wrote a series of short stories about my brother’s pet turtle called, The Adventures of Gonzo the Turtle. That turtle was quite a hero, saving the forest and the lives of the other animals.
Tell us about your title featured in: A Cursed All Hallows’ Eve
I’ve been a fan of gothic romance since I was a kid watching Dark Shadows re-runs with my mom. It was one of her favorite shows and has influenced a lot of my writing. In my twenties, I discovered Jane Erye, Rebecca and a long list of Victoria Holt novels. The Ghost of Morley Manor is a gothic romance featuring a penniless heroine who is desperate to find a way to keep her home and her brother safe. She resorts to summoning a ghost who might tell her the location of the hidden jewels that are rumored to be stashed somewhere in her home.
How did you come up with the storyline?
The story started from a writing prompt challenge several years ago about setting a story in a graveyard. My scene began with the heroine and her brother traipsing into the graveyard to conduct a seance and the story grew after that.
What inspires you to write?
I have an inner drive to tell stories. I can’t explain it. It’s part of my DNA, I think! But, my children inspire me to publish those stories. I want to teach them to pursue their dreams and what better way to do that than by pursuing my own?
Tell us about your other books:
All of my books are in the romance genre. I require a happily-ever-after with the books I both read and write. Heat levels vary from sweet to steamy and I’ve written short stories, novellas and novels. The romances I write are primarily paranormal, but also I write romances that are historical, gothic, fantasy, and sci-fi.
Where can readers find you?
My website is http://www.TriciaSchneider.com
My blog: http://www.shadowsofromance.blogspot.com
Tricia’s Romance Readers Newsletter: http://eepurl.com/NZ8Zz
Facebook – http://www.facebook.com/authortriciaschneider
Twitter – @TriciaSchneider – http://www.twitter.com/triciaschneider
Goodreads – http://www.goodreads.com/triciaschneider
BookBub – https://www.bookbub.com/profile/tricia-schneider
Pinterest – http://www.pinterest.com/triciaschneider
Instagram – http://www.instagram.com/triciaschneiderbooks
About the Author:
Tricia Schneider is a multi-genre romance author. From werewolves, vampires and witches to wicked pirates and sexy aliens, she weaves sensual stories where happily-ever-after is a guarantee. She firmly believes there is a book for everyone. A sentiment she gained after years of working as Assistant Manager and bookseller at Waldenbooks. After the store closed, she turned to writing full-time, publishing paranormal, historical, fantasy, sci-fi and gothic romances.
Tricia lives in Pennsylvania with her four children and two rescued cats. When she’s not typing away on her laptop, she’s riding shotgun in a ’67 Impala while keeping her eyes open for a madman in a Big Blue Box.