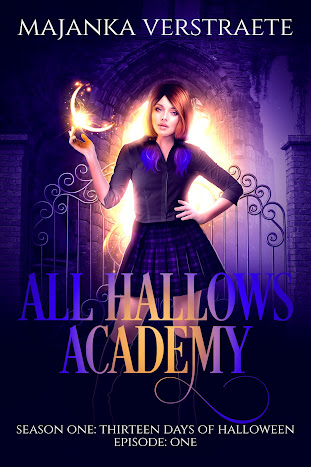 All Hallows Academy is one of the most prestigious universities in the world for witches and wizards and being accepted into All Hallows is an honor Lavinia Bloodbane and her best friend Jensen have been dreaming of for years.

The academic year at All Hallows starts with its most renowned tradition: Thirteen Days of Halloween. Each day of the thirteen days leading up to All Hallow’s Eve, a famous witch or wizard from the past is called upon and asked to reach through the veil separating the living from the death.

Lavinia wants nothing more than to fit in at All Hallows, but when something from beyond the veil reaches out to her on the First Day of Halloween, fitting in at the academy will be the least of her concerns…

“This is going to be amazing!”

Jensen, my best friend, grabbed my hand and squeezed it. His smile spread from ear to ear and seeing it, I couldn’t help but smile myself.

Today was our first day at All Hallows Academy, one of the most renowned institutions for witchcraft and wizardry in the world.

Before enrolling at All Hallows, Jensen and I had attended high school together, and our number one dream for the past three years had been to get into All Hallows. We both worked hard to get here, and standing here today, it still didn’t feel real.

“I think you already grabbed some people’s attention,” I remarked, grinning as a group of girls walked past us, some of them throwing flirty glances in Jensen’s direction.

I knew my best friend was attractive, although I had never seen him that way—to me, he was the boy I had grown up with, who had gone to Miss Hecate’s Kindergarten for Magical Toddlers for the first time on the same day I did. I had accidentally made a doll come to life, courtesy of my lack of control over my powers, and Jensen had saved me by knocking the doll unconscious.

Miss Hecate was anything but pleased that one of her students had caused such havoc, but the incident had formed the foundation of my friendship with Jensen, and we had been best friends ever since.

Now we were here, roughly fifteen years later, and there was no one I would rather be here with, at All Hallows Academy.

“Yeah, right.” Jensen snorted sarcastically, referring back to my earlier comment that he had caught the eye of quite a few witches already.

Jensen had always been oblivious to his own good looks—a stark contrast with his brother, Flynn, and the one person I did not look forward to bumping into in the hallways.

Okay, that was a lie. Part of me was looking forward to it. The stupid part. The teenage-crush part.

During the summer holidays two years ago, while I spent most of my time hanging out with Jensen, I developed this enormous crush on his older brother Flynn and ended up making a fool of myself as I tried everything to get his attention. Flynn, on the other hand, practically ignored me and dated girl after girl until none of us could keep track anymore.

Chill, Liv. Don’t let him get into your head again. Flynn is old news.

At least that was what I told myself while I kept trying to catch a peek of him in the crowd, but so far, no luck.

Where can readers find All Hallows Academy?

I have been writing books ever since I learned how to write, but my first official publication dates back to about ten years ago. It was called “Mirror, Mirror”, later renamed to “Fractured”, a young adult dark fantasy novel. In the meantime, the sequel to that, “Reflected”, has also been released.

Tell us about your title featured in: A Cursed All Hallows’ Eve

My story “All Hallows Academy” is an academy / reverse harem story told in different seasons. Season one focuses on the “Thirteen Days of Halloween”, a yearly event held at All Hallows Academy, in which a different witch or wizard from the past is honored each day during the thirteen days leading up to Halloween. The first episode of this season is featured in the box set.

How did you come up with the storyline?

I have been wanting to write in this format for a while, with different “seasons” and “episodes,” like you see on TV. I like the idea of a book episode following the format of a TV episode, with a nicely completed story while at the same time also having an overarching story arc. Since the box set is Halloween themed, and I’ve wanted to write another academy / reverse harem for a while, the rest of the inspiration came easily.

What inspires you to write?

Everything. It’s really hard to answer this one. Not a day goes by that I don’t have inspiration for one thing or another, and I really enjoy writing. It’s my favorite spare time activity and hardly ever feels like a chore.

I have written over forty books and counting, so there’s a lot to tell. Let me focus primarily on books in similar genres.

My “Academy for the Wicked” series will probably be of interest for readers who enjoyed “All Hallows Academy”. It’s a reverse harem academy series with all types of diabolical creatures: demons, vampires, warlocks, necromancers… It’s called “wicked” for a reason.

Then, in terms of young adult books, I have a whole lot of different series, so I’ll just sum up some of my books here. All of them can also be found on my website. I have indicated the ones that are not published yet, but that are available for pre-order.

The Soul Thief (Angel of Death Series #1) / YA Paranormal

Murder in Mind / YA Dystopian

Queen’s Fall (An Alice in Wonderland Retelling) / YA Fantasy

Majanka Verstraete studied law and criminology, and now works as Legal Counsel. Writing is her passion ever since she learned how to read.

She writes about all things supernatural, her books ranging from children’s picture books to young adult novels, all the way to new adult academy and reverse harem books.

Check out her website for more information about her current series and her upcoming projects: http://majankaverstraete.com 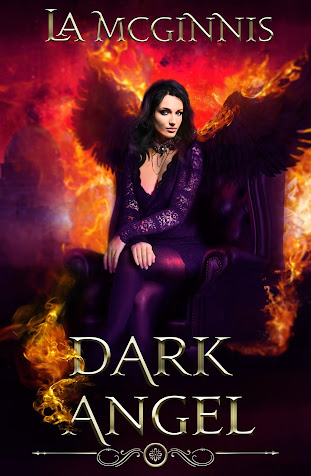 My name is Catherine, and I’m here to tell you, life on the run is totally overrated.

Sure, you meet new people, see new places, but after a while, everything blurs together. Except the fact that everywhere I go, people die. That’s the one thing that never, ever changes.

Until I meet Rex, and he explains everything to me. I’m the Angel of Death, and he and his friends are going to teach me everything I need to know about being angelic.

Now my problem isn’t choosing a new city—it’s choosing which of these sexy angels will steal my heart first.

“Tell me again how long you’ve looked for me?”

Rex lifted his lips from me long enough to answer, “Catherine, I’ve been looking for you my entire life.”

“That’s a very good answer,” I told him as the backs of my knees hit something immovable. We tilted over, and he fell on top of me, his legs straddling my hips, and sank into me, his cock pressing against me through our jeans. I wiggled until he was right where I needed him to be, and felt a flare of lust.

“Probably should have undressed first,” he whispered, his voice husky. “But I’ll make this work.”

I lost track of whether it was his lips or his hands that stripped me, since the sensations rocking my body seemed to have removed my ability to think clearly. I just wanted more. More friction, more pressure, more of his skin rubbing against me. I lost myself in a fog of lust and need, and I loved the headiness of this, the feeling of complete freedom. I never wanted it to go away.

Where can readers find Dark Angel?

Hello and welcome, readers! We have L.A. McGinnis here with us today. L.A, thanks for visiting us.

I’ve been writing since 2007, but seriously since 2016. I was always interested in the power of stories, and took lots of college courses in mythology, Old English and Shakespeare. It wasn’t until my kids were older, I could steal the time to actually write!

Tell us about your title featured in: A Cursed All Hallows’ Eve:

Catherine’s story begins when she has reached a dead end (literally) in her life, and is trying to figure out where to go. From there, she begins to find answers for what—and who—she really is. I’ve always found the heroine’s personal journey fascinating. For this book, I dropped the reader into the middle of the mystery, so they can discover Cat’s secrets at the same time she does.

Queen of Swords: The Banished Gods: Book One   https://www.amazon.com/dp/B07N6MML7C

Perched on the edge of a national park, L.A. McGinnis spends her days writing sexy urban fantasies filled with brooding heroes and smart, bold heroines. A life-long fascination with mythology inspires her to weave these contemporary tales of legendary fated mates set in gritty, urban settings like New York, Chicago and London.