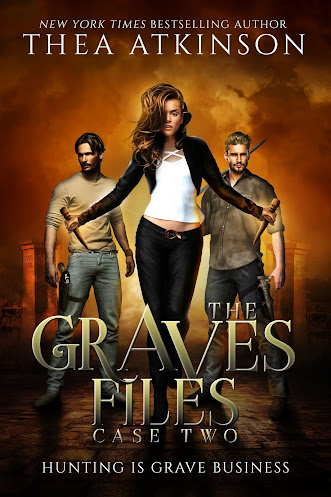 Call me Graves. Not just because it’s my name, but because if you’re a baddie of the supernatural type, I’m going to put you there. If I can’t, one of my hunter partners will, and we’ll die trying if we have to. If you’re a new recruit who needs to be tested…you better believe the demons of this world will be happy to send you there.

Which is why I have to put this kid through the paces. He’s slow. He’s weak. Even worse, he’s whiney. Just why the organization wants him tested is beyond me, but here I am on Devil’s Night letting him duke it out with a miniature golem to prove he’s worthy.

Except I’m clenching the spell he’s supposed to use to de-animate the creature, so I really can’t expect the kid to protect himself.

What else shouldn’t I expect?

The gargantuan golem right on its heels. You know, the one we didn’t make…

I always thought Golems were big, brutish things. I imagined them as lumbering, single-minded creatures with clay-like skin, intent on following the edict of one man or woman who had scratched a spell into their foreheads to animate them.

I was right about the skin, the spells, and the single-mindedness. I was wrong about the size.

A fact that was perfectly evident as I leaned on a brick building in the oldest borough in the city.

The kid in the alley with me, a cocky little bastard in his late teens despite his assurance he was in his twenties, was at the moment struggling to get the best angle on a three foot golem who was, at worst, evading contact, and at best kicking the kid’s ass.

Life was full of surprises it seemed. Golems could be small and fast, and kids in their teens could apply to be hunters. Go figure.

“Watch out for his penis,” I said, thinking even as I said it and winced that issuing such a warning was yet another thing I didn’t expect to be doing tonight.

“It’s not a dick,” the kid barked over his shoulder, clearly annoyed with me for insinuating that the thick appendage, badly placed and obviously meant to be a leg on a badly misshapen golem was even remotely sexual.

Whatever it looked like and was meant to be, the creature was whorling about in a circle as he evaded the kid’s best attempts at controlling him. The mal-formed leg jutted out from the clay belly instead of hanging below the waist the way it should if it were a true leg, and it was as good as a club.

Score one for the Golem.

Where can readers find The Graves Files Case 2?

Hello and welcome, readers! We have Thea Atkinson here with us today. Thea, thanks for visiting us.

How Long Have You Been A Writer And How Did You Come To Writing?

I have been a writer since my preteens, although I wouldn’t have called myself a writer then. I wanted to be an actor and so I wrote little plays and stories for myself to play out beneath my eyelids as I daydreamed.

Tell Us About Your Title Featured In : A Cursed Hallows Eve

Graves Files follows our jaded beast hunter, Vicki, as she hunts supernatural creatures with her two partners and along the way searches for her own humanity. She’s scrappy and lonely and mistrustful but she desperately wants to feel normal. Except everything about her life is abnormal. She’s attracted to her partners and the series will have a slow burn reverse harem feel to it, while it moves along arcs reminiscent of the series Supernatural…except with a chick as the main hunter.

How Did You Come Up With The Storyline?

To be honest, it started with my newsletter. I have a catbot that writes my emails and she’s fairly snarky. She accused me of wanting to write about golems when I had no desire to do so…So when I began penning the second case for Graves Files, the first thing that popped into my mind was golems. So I went with it, and now the story centers around a mysterious golem that the hunters have to stop from hurting kids on Halloween.

What Inspires You To Write?

Most days, it’s not inspiration that fuels me, but love of stories. Like I said earlier, I wanted to act, so character is what drives me. What is a character’s past, their wounds and things that drive them to do things. What keeps them in a state of misery or propels them to find peace and self-acceptance. As I follow that, the stories entertain me, and so I suppose it’s those things that inspire me in the end.

Tell Us About Your Other Books

I have a variety of series. I write what interests me at the time. My former agent marketed me as a dark writer, and now I realize it’s true. There’s always an element of darkness in the stories, so whether it’s an apocalyptic, biblical type dystopia like in Theta Waves, or a historical coming of age fantasy as in Witches of Etlantium, I follow the trail of shadow. I stick mostly to urban fantasy, but I go where the character leads me. So you’ll see paranormal shifter romance with Rogue Huntress, Arthurian dystopia in Queen of Skye and Shadows, and vampire romance in Vampire Addictions.

Where Can Readers Find You?