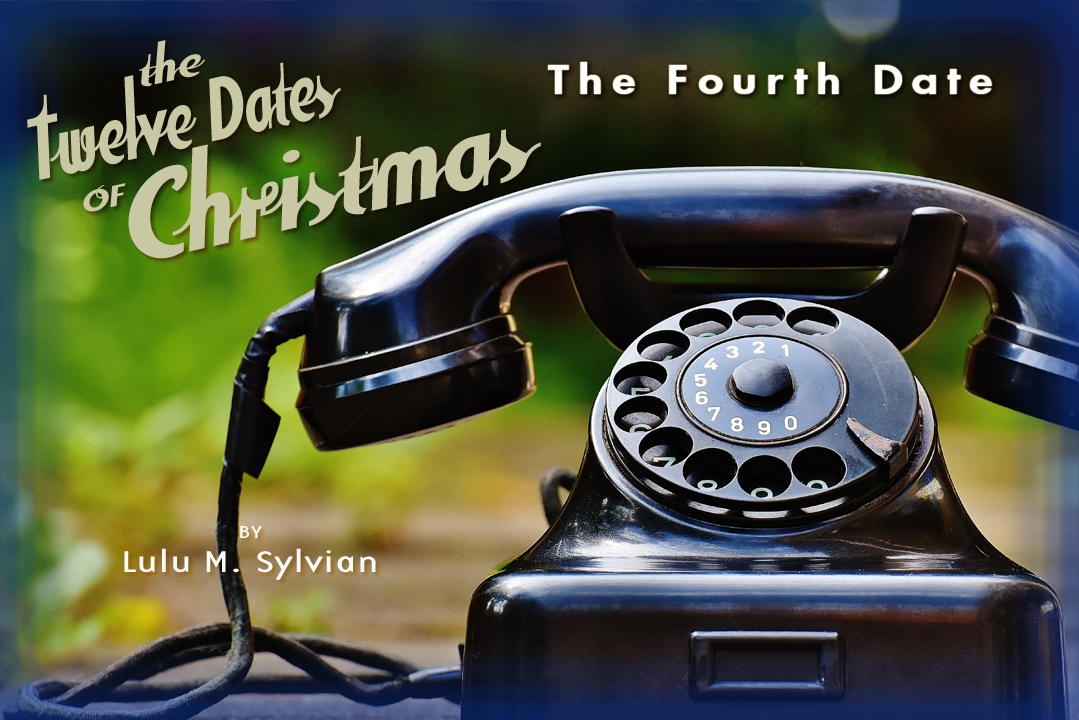 On the fourth day of Christmas I woke up happy. Stupid stinking happy. Princess movie happy, birds were chirping, cute little chubby rodents made my breakfast and made me an entirely new wardrobe kind of happy.My lips were still a little tender after all that kissing. But man, oh, man, oh man. It was so worth it.

The stupid happies carried me all the way through my morning commute (a miracle by LA driving standards). It wasn’t until I went to take a sip of coffee I realized I didn’t have one. That’s the power of stupid-happy.

I turned on my computer and opened my email as I moved into my cubicle for the day. I stroked the side of my monitor in response to an email request from Blake, clearly a habit now.

I slid open the bottom desk draw to drop in my purse when my desk phone started ringing. “This is Nat.”

“Did your drive in go incredibly smooth? Mine did.” It was Chis, sigh. He sounded stupid-happy too.

“I’ll see your good commute and up you a coffee-free morning.”

“Seriously?” I could hear the smile in his voice. That of course, made me smile more.

“Yeah, no coffee. Are you having a good morning?” I asked.

“What are you doing for lunch?” Lunch seemed like hours away, but I wanted to see him again.

“I have an all-day meeting. That’s why I was calling. I need to drop off some forms to your department, and was wondering if you wouldn’t mind meeting me halfway?”

“North stairwell in five minutes?” Oh a clandestine meeting in the stairwell, I wondered how much making out we could do.

“Make it three.” He countered.

As calmly as I could, I hung my phone up, finished putting my stuff away, and tried not to run to the stairs. Once in the stairwell, I pounded up the stairs. Chris was running down just as quickly. We met on the landing between the two floors.

His hands were empty.

“Looks like you forgot your paperwork.” I cooed. I played with the front of his shirt.

“That was just a ploy for anyone who was listening. I couldn’t very well say I wanted to make out with you some more over the company phone. You know those lines are monitored.”

I finished in a stilted computerized voice, “for quality assurance.” He smiled a dazzling grin at me. “So you want to kiss me some more?”

“Yeah. I really liked that last night.” His hands slid onto my hips, and he stepped in closer. His head tilted down, and his eyes closed. We heard footsteps on the stairs. He stood straight and stepped back. I stared at the floor. I didn’t see who passed us.

“You know,” Chris’s gaze landed on my chest. “These are very distracting. I honestly keep thinking about them.”

“Oh really?” I arched my back, giving the boobs a bit of a lift. “You didn’t seem very concerned with them last night.” It was true. I had half expected him to be super handsy, yet he had barely even gotten close.

“Truth? I am in awe, and a bit intimidated by them.” His fingers barely brushed the tops of my breasts as he zipped the front of my shirt up another few inches. I had worn the zipper a bit lower than usual for him.

“Oh yeah?” He moved in a little closer.

“Yeah, they would like to play with you sometime.” I can’t believe we were talking about my breasts as if they were a complete and separate entities. I mean, at times I swear they are, but for the flirting, it was kind of lame. Lame, but it was clearly working for the two of us.

He smiled and nodded. The rest of our conversation was mostly just mooning at each other and sighing. His watch beeped, pulling us out of our mutual gazing stupor.

I nodded, bit my lip, and watched him sprint back up the stairs. I went from stupid-happy to lonely despair in the blink of an eye. I slogged back to my desk. When I got there Blake the Beautiful swiveled back and forth in my chair. He was so pretty with his smoky skin and his dapper beard. But he didn’t make the butterflies in my lower abdomen flutter anymore. I leaned against the opening to my cubicle.

“What can I do for you, Blake?” Blake never visited for the sake of a chat.

He continued to spin around, his fingers steepled together tapped against his pretty mouth. I had wanted to kiss that mouth the first time I met him before I knew he liked boys. Heck I had wanted to kiss him even after I knew he liked boys, he is just that pretty. Now, it was just a good looking mouth, like it belonged to some actor in a movie, nothing more. It wasn’t Chris’s mouth.

“So,” he began. Twist. “What did I see you and Chris Jones getting up to in the stairwell? Hmmm?” He continued to twist around in the chair.

“Oh it was something, look at you blush.” He leaned forward in the chair.

“What did you see?” I asked. He saw nothing because Chris and I did nothing.

“And someone else seemed a little too pleased with herself.” He continued.

“You aren’t denying it? You aren’t going to say it was a random meeting while you were running errands?”

“Blake what’s the problem? You caught us flirting. No big deal.”

“I love a good juicy office romance.” I had not pegged Blake the Beautiful to be sassy office gossip. He always seemed so aloof.

A week ago I wouldn’t have been able to deal with the fact that Blake was sassing off to me, let alone been able to actually grab his arm to pull him out of my chair. What can I say? My hormones act funny around pretty boys. And really hot men.

I sat and quickly typed an email to Chris. “Blake was in my cube, he basically thinks he’s busted us on some hot office romance. FYI, I did not deny it.”

I hit send and hoped I handled the situation right. It hadn’t occurred to me that Chris might want to keep this on the down-low until that very second.

I stared at my monitor waiting for a response ping. Chris was in a meeting. I had to be patient.

I was in the middle of sorting my email inbox when it pinged with a new message. “Good. I’m not worried about keeping it a secret if you aren’t. – Chris.”

Big sigh of relief. Double sigh, because it always bothered me when a guy wanted to keep the beginning of something a secret. I kind of wanted the world to know that I got to make out with Chris Jones, and hopefully on a regular basis. This also meant he didn’t have another girlfriend that I didn’t know about. Triple sigh.

I spent my day sorting and matching invoices to packing slips, and forwarding the matched sets on to the people who handled the money. It was a very long day.

My phone rang again just before I decided to head out for lunch.

“I have a hot minute, and wanted to say hi.”

I smiled, the stupid-happy flooded me again. “Hi, Chris.”

“So that was Blake in the stairwell?”

“Well everyone should know we are dating by the end of day tomorrow. He’s pretty fast.”

“Stealthy, the man is stealthy.”

“Hey Chris? What ya doing this evening?” I wanted to ask him if we were really dating. But it seemed stupid, he had just said we were.

“Work. It looks like this meeting is going to last a few more hours. Then, I’m going for a run. Do you want to join me?”

“Running? Have you seen my boobs?”

“Yeah.” His voice was kind of breathy.

“These boobs were not made for running.” He started to make a noise on the other end of the phone, and I panicked. I didn’t want him to stop dating me because I didn’t run. “But I hike, and I skate, things that don’t jostle or cause multiple black eyes.”

“Cool. If the weather holds let’s go skating this weekend. I have to go, they’re starting up again. I’ll call you later.”

The rest of my afternoon lagged.

My evening was lonely and dull.

I lounged across my couch watching mindless TV. A soft tapping knock sounded on my front door. I slid the chain across before opening the door to peek out.

“Chris!” I closed the door so I could unchain it, and open it all the way. He stood there in his sweaty running clothes. “What are you doing here?”

“I wanted to say good night.”

I stepped back so he could come in.

“You could have just called me.”

“Yeah but I can’t kiss you over the phone. And I really missed not kissing you today.” He wrapped his arm around my waist and pulled me to his chest.

The kiss was warm and searching. One of his hands found its way to one of my breasts.

“Good night,” his voice was raspy after the kiss. He let me go and headed out the door.

“Good night.” I managed to say after I got some of my wits back after that kiss.

Oh, I liked this guy. I liked him a lot.

Catch up with the Third Date

The story continues on the Fifth Day of Christmas