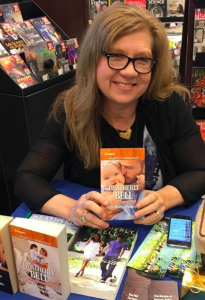 I like to set a scene for where the interview is taking place. It’s been a while since I was in the heart of Silicon Valley, where is a good place to hang out and have a conversation?

Here in my small town of Morgan Hill, we like to meet at Peet’s Coffee.

Can you remember the first romance novel you read?

How long have you been writing?

I will say about 14 years though of course I wrote some in high school but I don’t count that.

What is your writing process? Are you a pantser, or a planner?

I like to call myself a plotser. I used to be a pantser, and that actually worked for me, but my publisher forces me to give them a synopsis. I use it as a road map of where I will go with the story. Mostly I focus on the character’s growth ARC. Other things can change but that shouldn’t.

Deadlines! But seriously, when I am in the sweet spot of a story, I just want to keep going. It’s like I’m telling myself the story.

Character development is a fascination of mine, where do your characters come from?

My characters usually jump into my mind’s eye, practically fully formed. I don’t really know how that happens. I think I’m like a sponge of everything I’ve ever seen and everyone I’ve ever met. But I don’t often know what their favorite color is or their favorite food. I simply know who they are and what they have to learn. I try my best to keep it simple.

Tell us a little about Country Gold, a Wilder Sisters novel (upcoming release out 9/17)

I’ve wanted to write this book for such a long time but had too many other projects in the way. It’s been germinating in the back of my mind for a while and took a few different forms before it settled down. This is the story of three sisters who were very young when they formed a country western band and eventually became very successful. When it all implodes due to a sex scandal and sagging sales, the sisters are let go by their recording label and each has to re-think the rest of their life. Who are they without fame and music? Without each other? While they figure this out, they hide out in their central coast California town of Whistle Cove. And of course, they each have a love interest to come along and complicate the hell out of their lives. Much fun.

Fame tore them apart…can music bring them back together?

A sex scandal ended the careers of the Wilder Sisters, the CMA award winning, chart-topping country girl band. But Lexi Wilder is okay with that, thanks for asking.

She’s been on the road since roughly forever, and even if the scandal has followed her home to Whistle Cove, California, Lexi is going to enjoy the break. After all, there’s quite nothing like the beautiful sandy beaches of Monterey Bay to calm a woman’s soul.

Luke Wyatt never asked to trade fame and fortune for the only woman he’s ever loved. It happened anyway.

Now that he’s finished a punishing year-long national tour, all bets are off. He’s coming back to his hometown of Whistle Cove for the quiet, the beaches, the inspiration, and the girl. Not necessarily in that order.

There’s pressure from Nashville to deliver more country gold like the song he co-wrote with Lexi Wilder. But that little bit of magic is not likely to happen again.

Because she’s still not speaking to him.

Do you listen to music when you write? What do you like to listen to? Was there a musical influence for Country Gold?

I cannot listen to music while I write. It’s too distracting. I pick up the tune, start singing. Forget about the writing, I’m going to dance! I do like listening to country music and do so often. Sam Hunt was the musical inspiration for my hero, and Miranda Lambert for my heroine.

Are you a TV watcher or a movie goer?

Mostly movies and long running series. I don’t watch much TV other than Dateline.

Which (show or movies) are your current favorites?

Orange is the new Black

If you could have one of your stories made into a movie, who would be in your dream cast?

I think Crazy for You, a Christmas book, would make a wonderful Hallmark movie. Except for all the sex. Take that out and it works. I would cast Emma Stone as the heroine and Jessie Metcalf as the hero.

If the NSA were to examine your browser history, what “concerning” topics might they find?

Fortunately, I write lighthearted. Recently I searched for Congressional Medal of Honor recipients. Wake-boarding lessons (I watched YouTube videos) and also endangered wildflowers in California. Nothing exciting at all!

What are you currently reading?

How can I finally finish my book?

Write every day even when you don’t feel like it. It’s a job like any other. It took me 14 months to write my first book. It got faster after that.

What is your secret party trick?

I don’t know if it’s a party trick, but I’m a trained singer so I usually do well on the Karaoke machine!