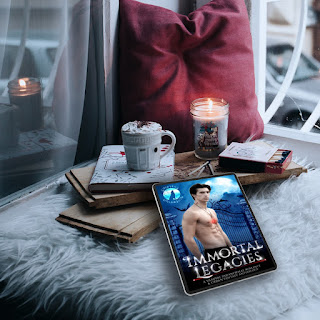 Francis Schacter craves one thing more than blood…a cure for his curse.

He made the mistake of crossing a new witch and has been dealing with the clumsiness of a human. Keeping the secret from everyone hasn’t been easy, especially from his King, who can read minds with ease. During one of his night walks in the mountain, he causes a car to go off the edge. When he rescues Amber from her crushed car, something in his soul awakes. The curse says it will end when he completes the bond of mates, but convincing Amber they are meant to be isn’t easy.

Stability is all Amber Howard wants, and so far, she’s found it as the Mermaid’s human assistant. Finding her job wasn’t easy, and she’ll fight like hell to make sure she doesn’t have to go to bed hungry ever again. The night Francis makes her crash her car, she’s pulled into a new world of darkness and shadows. Part of her wants him, but the way he avoids certain topics makes her suspicious. Her choices will determine the future for vampires all over the world. 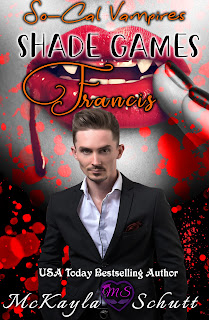 McKayla loves to write books about sexy werewolves, hot dragons, witches and more. Now a USA Today Bestselling Author!
She’s a stay at home mom of two in the state of Wyoming. Born in California, she misses the hot weather all the time. Her goal- to write as many sexy books as possible. However, being a mom of two little ones can take time but she is pushing to finish her work to get more books out for her lovely fans.
Ever since she was little, she wanted to be a writer, but doubters said that it would be impossible to make money at it. She is pushing herself hard to show them they are wrong.
She would like to remind everyone to review what you read, it’s important!

Q: How long have you been a writer and how did you come to writing?
I’ve been writing since high school but I started publishing in 2015. I started writing to help move past a trauma as a child.

Q: What currently compels you to write?
My love of stories.

Q: Where do your characters come from?
Sometimes it’s my dreams and sometimes they just come to me while I’m writing.

Q: Who is a favorite character that you’ve written?
I would think Magnis was the most interesting, he kept appearing in different series then I finally caved and gave him his own book.

Q: What’s the one question you always like when people ask authors?
And please answer. What’s your favorite book you’ve written, and my answer is always my first book. Imprinted: The Beginning but it’s being re-written now.

Amber leaned over and hit the button on her phone to end the call quickly as another turn raced up to meet her. Her phone beeped three times, and she glanced over at the screen for a second. When her eyes returned to the road, her heart leapt into her throat and her foot slammed on the brakes. A person in all black stood in the middle of the fucking road!

Her back end kicked out to the right, and before she could correct her car, she was falling down a cliff. Her grip tightened on the steering wheel as the rush of adrenaline raced through her blood and a scream burst past her lips. The seatbelt bit into her flesh as the airbags popped all around her when the roof hit the ground hard. But it wasn’t over as it flipped again, going down the cliff backward. Another flip shattered her front window, the glass cutting up the airbags. Panic surged through Amber’s blood as she continued down the side of the mountain.

The back end slammed into the side of a tree and glass shattered all around her, cutting at her face and arms. I’m going to die! She wanted to scurry away, but her muscles were all seized up. The car slowly shifted against the huge tree. Metal groaned, and she turned to see the same man in all black at her door.
“How?” she asked as he yanked off the car door, tossing it down the rest of the way to the ground. He broke her seatbelt and yanked her out with ease as the car tried to snatch her away. She wrapped her arms around the male’s neck and clung to him. “Thank you.”

Embrace the dark. Dare to take a nibble and depart from the mundane.

Join bestselling and award-winning authors as they cross the threshold into worlds filled with mouth-watering creatures of the night. Packed with desire and passion, these drool-worthy vampires are determined to capture the hearts of their fated mates.

Give in to your cravings with Immortal Legacies. One bite could change your life. 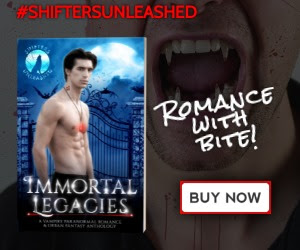