Where Mary has to survive the night 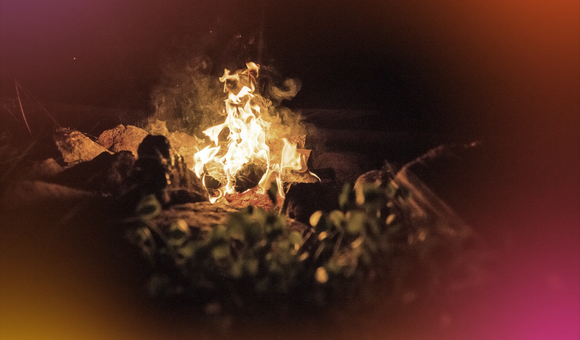 Catch up with Chapter 24…

Mary never expected to actually miss being in the company of a large sauran, but here she is. She trusts Marshall to keep her safe, but he’s just a man.

The fire snapped and crackled as orange flames danced against the dark sky.

Marshall sat at the opening on the shallow cave poking at the fire, keeping the flames high.

Mary sat curled around herself pressed against the back wall.
The chittering sound that had warned them of sauran activity nearby had faded shortly after sunset.

Mary couldn’t get the sound out of her ears. The lowing of cattle turned terrified. She had no ideas that cows could make such terrified screaming sounds. Or maybe that was the beasts they now stayed vigilant against.

“If you’re going to stay awake and keep watch, then I shall as well. I can keep you company.”

“I don’t need company. I need you to be able to watch me while I sleep tomorrow.”

“You plan on sleeping do you?”

Marshall adjusted so that the fire illuminated half of his face. His eyes were on her. He was almost handsome.

“Tomorrow we want to get as far out of this area as possible. Those little saurans are territorial. We get out of their area, they leave us alone. You won’t be any good to me, or yourself if you’re tired. You’re a lady, you aren’t used to—”

“And a thorn in my side. Go to sleep, will ya. I need you to keep up in the morning.”

Mary huffed and squirmed in an attempt to get comfortable enough to rest. She slept in fits and bursts. Marshall’s strong back was always there where her eyelids drifted up, opening for a moment, before returning to unsatisfactory sleep.

Her eyes drifted open, the fire was low, too low. Marshall was gone. She felt instantly awake.

“Marshall?” she called out tentatively.

There was no answer.

She crawled forward. She heard the low rumble of some animal growl. She didn’t know if it was mammal or sauran. The stick Marshall had been tending the fire with lay discarded near where he had been sitting.

She reached out and snatched the stick, quickly cowering back against her shelter wall. Poking at the fire she got the fire blazing once more.

Movement beyond the fire caught her eye. It looked like rippling fur.

She shoved her hands into her mouth to keep from screaming. She could not stifle her whimpers of fear. The fire reflected off a pair of bright eyes, wolf eyes.

Mary poked at the fire again.

The wolf drifted into the dark. The fire’s light reflected dimly on the animal’s fur, letting Mary know it was still out there. She hoped that wherever Marshall was. he knew about the wolf.

It didn’t seem to be leaving her, waiting for a midnight snack she guessed.
At least it was on the other side of the flames, and it was keeping the nasty saurans at bay.

Mary stared at the wolf as it faded in and out. She jerked awake, and poked at the fire. It responded and burned brighter. Her eyes couldn’t focus. She thought she saw Marshall.

The next time she opened her eyes, the fire had died down. Marshall was shaking her, and the sun was up.

“Mary time to wake up, we need to get moving.”

Will they get out of the sauran’s territory in time? Find out in the next episode. January 2023