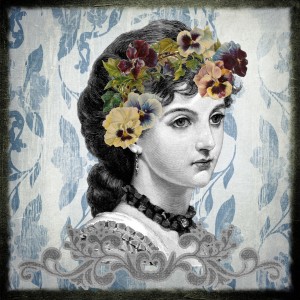 Mary sat, perfectly poised. The crumpled telegram in her fist, and the white knuckles rimmed with red, strained skin were the only clues to her anger.

If the message had been delivered an hour earlier she would have taken to her bed, at least for a few days, maybe longer. But she had already endured the ritual torture of being laced in and dressed. Besides, if she took to her bed now she would miss lunch with Mr. Peterson, a cousin to the Washington Porter. Mr. Chicago fruit himself. Her grandfather should be pleased she was making such prudent and profitable connections.

Janey at least was thrilled that Mr. Peterson began calling on her younger sister. They had a constant delivery of fresh fruits, thanks to the Porter family connection. She told Mary this at every turn.

“Was Mr. Peterson to be expected today? Do you think he will bring us some oranges? Would it be rude of me to ask if he could get us grapes? They ship wine don’t they?”

She always asked Mary with a mischievous wistful air, but she never once spoke of fruit or wine to Mr. Peterson directly.

Mary breathed through her nose slowly. She had to calm her nerves or she would do herself a grievance. This corset was laced a bit too tightly. That was for the benefit of her lunch companion. He had stated he was taking them to the Palmer House, and then a stroll afterward.

Janey and her husband Charles would accompany them to lunch. And then the chaperones would ever so discreetly walk a distance behind them during their stroll so they could discuss matters privately.

Mary anticipated a declaration of some form this afternoon. A request to speak to her grandfather, maybe even an actual proposal, after all, Mr. Peterson was a bit daring when it came to the rules of proper society. He had already insisted that Mary refer to him by his nickname Py. She couldn’t even bring herself to call him by his given name of Pythagoras.

But this telegram changed everything.

“Mary I do believe—” Janey stopped abruptly as she swept into the parlor. “Well, this won’t do. We both can’t wear green.” She coughed delicately into a handkerchief. “You need to go put on that lavender dress.”

Mary did not suppress the glare she gave her sister. If anyone should change it was Janey. She looked dreadful in green. Almost as if she too took on a verdigris pallor emphasized by her color choice.

Charles languidly strolled in after his wife. “I say, that telegraph was inconveniently early.”

Mary wanted to scoff at his complaint as if he were the one to open the door and shoo the poor boy away. At the time Charles was barely awake and in a dressing gown.

“What telegraph?” All thoughts of almost matching dresses gone from Janey’s head in a blink.

The longer Mary stayed in Chicago, the longer she realized how well matched those two were. Selfish to the core. Charles may be self-centered, but he was ridiculously wealthy, and that’s why grandfather allowed Mary to visit for so long.

Grandfather was a forty-niner, and he struck gold. But everything for him became about hitting the next vein of wealth. Mary knew he was living off the remaining dust of his fortune, and he expected his granddaughters to keep him elevated in the financial ranks.

The easiest and only way for this to happen was for them to marry wealthy. Mary was ahead of the game. A match with the Porter family, even a cousin of the Porter family should make the man happy. But he was an interfering bastard.

Mary felt her eye widen and her cheeks flush with the rude thought.

With as deep of a breath as she could manage, she handed the crumpled paper over to her sister.

Janey stumbled as her knees weakened.

Charles led his wife to the settee next to Mary.

“I guess lunch is canceled then?”

Find out what the telegraph says next month…

2 thoughts on “An Improper Derailment: Chapter 1”